So many of us cling to certain beliefs that just hurt and because the belief isn’t readily apparent to you, you continue to believe it and thus perpetuate the pain all over again.

For example, you might believe that if you have “well-behaved” kids that get good grades then you’re an A+ parent

Maybe it’s if you look a certain way then you’d be beautiful, attractive, fit (which to your mind really = good)

But why are we basing so much of our happiness on OUTSIDE praise, validation, and recognition?

Why are we trying to “outsource” our emotional well-being?

When you start feeling stressed, pressured, anxious, or other negative emotions over a thought – maaaaaybe it’s time to question it.

Ex: We don’t drink soda at our house so when my youngest son went elsewhere and had it as a treat he complained that it hurt his throat and didn’t feel good, yet…he was still trying to POWER-THROUGH it. And…WHY???

Why do you try and POWER-THROUGH something that clearly doesn’t sit well with your mind, body, and heart?

You don’t HAVE to drink it!  You don’t have to believe the thought. You don’t have to operate from that belief anymore. I promise you, there is a more productive (and healthy) option available to you if you pause long enough to look.

Let me offer you four questions to ask yourself when a belief starts to hurt:

Like my son and soda, he had a belief that soda is good and that he should drink it

But what if it not true anymore?

Or what if it’s not true for you anymore?

Start there – just dig in for more clarity and look for ways you’ve evolved.

2.) How does thinking this thought make me feel? And when I feel that way, how do I show up?

Like the soda example. If it hurts, stop drinking it.

There’s no need to try and power through it. Pause and just reflect, how does thinking this thought makes me feel and when I feel that way how do I show up?

For example, I was talking to a client recently who shared with me that they feel uncomfortable in conversations with some people and they believe that they’re not really a good conversationalist. So when they start conversing their head is full of doubting, limiting thoughts – you can’t do this. You’re not good at it. You’ve never been good at it.

Which they told me felt limiting and anxious

And when they felt limited and anxious they started acting weird, giving short answers, not able to explain themselves very well, and feeling awkward – it’s kind of a self-fulfilling prophecy, right?

What you believe about yourself is what you create – it’s not that they are awkward or a bad conversationalist. But rather their limiting beliefs cloud the way to confidence and light.

Always check in with yourself and ask, how does thinking this thought make me feel? And when I believe it how do I show up?

I want to give you one more example because I think it’s really relevant here:

When you’ve had a disagreement or just not seeing eye-to-eye with someone you might form a limiting belief about them and about your relationship – either as friends, co-workers, committee members, family members, anyone

And you have this belief that they’re something

Too negative, too judgmental, too overbearing, too mean, too something

I can guarantee it’s not a positive, productive feeling, right?

And when you believe that about them, how do YOU show up?

And we create this uncomfortable, not productive experience for ourselves and it’s limiting. It limits your relationship with them and it hinders it within yourself as well.

Check-in, look at what this thought is creating in you and costing you.

It might be time to reframe it and rewire your brain to a new, more helpful belief.

3.) Can I find evidence to prove that the opposite might be true?

I love this question so much because when we’re operating from a limiting belief we’re so quick to defend it and argue for our limitations even though they don’t feel good, even though we don’t want it – there’s a part of us that just can’t seem to let it go because we have evidence to prove it true, right? And when we believe that there’s no need to look anywhere else – our brain has done its job, it’s efficient, labeled, and moving on – but it’s heavy and painful.

So asking yourself, can I find evidence to prove the opposite true is so helpful because 1.) your brain loves a job to do – it will go to work finding evidence for you and when it find it 2.) You’re able to show yourself what else is true – what’s another option? And when you know you’re not stuck with that one thought – that one side of the story – it’s easier to choose what you want to believe.

I promise you there is another side. There is evidence to prove the contrary true too.

When you believe someone is “the worst” and you can’t get along with them, I bet there is someone else that loves them and is perfectly happy to spend time with them, right?

And little by little you start to see that your limiting belief isn’t so accurate after all, right?

4.) Could I be carrying a belief from my past that I mis-assigned meaning to?

This is such an important question to ask yourself because so often we collect these limiting beliefs from our childhood or early years and at the time we didn’t have the brain capacity to be able to look at them objectively or question them at all.

A lot of the time it probably came from someone you respected, or an authority figure – a parent, a teacher, an adult so we just accepted them and now we’re running full force with them, right?

For example, say the only time your parents ever gave you a positive compliment or positive attention was when you did something big or something really well at school. So you started adopting the belief that in order to be of worth, to be recognized, to get positive attention was if and when you excelled at something. So you try and work hard, you push yourself to be more productive, you start withholding love, and praise from yourself when you haven’t “earned” it. The meaning you attached to your parent’s praise at the time seemed true but it’s actually hindering your present self.

That’s an example of a mis-assigned meaning.

I shared with the Catalyst members this month that in elementary school I had a teacher that wrote a two-word comment on a progress report that I then carried with me for decades as a limiting belief. The teacher wrote, “bad handwriting” – and I was embarrassed and felt like I did something wrong. I made that two-word comment mean that it was like an ailment and a disease – I had bad handwriting and like I said, I became horribly self-conscious about it for decades. He was an authority figure, someone who had the power to dish out grades and I wasn’t a point in my development to question his meaning or motives.

I think about it now as I’m homeschooling my 4 kids and there are several assignments that I just can’t read sometimes. Totally illegible and it doesn’t mean that they have bad handwriting what it means is that they rushed through an assignment they weren’t super excited about anyway just to get it done. And I know that as their mother and I can tell them, “hey, I can’t read this – please fix it” but to a teacher and class of 30+ kids – it was probably out of his own frustration coming across 30+ assignments of illegible writing and instead of writing paragraphs or anything that might take a lot of time it was more efficient to downsize it to two words.

I know he had no idea that I would carry that like a blanket of shame for decades.

I saw something and mis-assigned meaning at that time in my life.

It wasn’t until my husband made a comment that he likes my handwriting that I questioned it, like, “What? What do you mean you like it? Don’t you know it’s “bad”?”

And really, it’s subjective right? Handwriting is an art form that’s subject to each person’s preferences. I realized that maybe I didn’t need to carry that belief around anymore. It wasn’t a fact, it was a thought and it sure didn’t it feel good or have me showing up confident.

You can question these beliefs as an adult and move forward.

The good news and empowering fact is that by being aware of your limiting beliefs you can start questioning them and then you can create a new more productive story for yourself. You can see how silly some of these beliefs are and have been in your life. You can start feeling more free as you choose another belief that serves you, works with you instead of against you.

Use these four questions to identity and then squash these painful limiting beliefs! And to help you remember them easier use this acronym:

THEM – you can squash THEM

You don’t have to believe THEM

So here it goes:

H: How does it feel when I believe that thought?

E: Can I find evidence to prove the contrary true?

M: Is this something I mis-assigned meaning to?

Okay, my friends. Start practicing these and lifting that heavy burden of negative beliefs.  Talk to you next week! 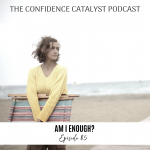 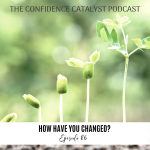 Episode 86: How Have You Changed?podcast