Start By Having A Great December

Well folks, it’s officially December starting tomorrow. You don’t realize just how FAST the time goes until December hits, right? Then you think, WHOA! Wait a sec…where’d the entire year go??? That was FAST! Or at least that’s kind of what I tend to do. December is a HUGE month for me – not only because of the holidays. I do LOVE Christmas. We’re also a homeschooling family so December also equals, WINTER BREAK for me – yay!

Let me explain that a bit better. A couple of years ago this concept was introduced to me by Jody Moore. She said something like this: “If you want to have a great NEXT year – start by having a great DECEMBER”. The idea behind i
t is to start before you’re fully ready. I used to wait for the “perfect moment” to start something new – January first was a big day for me because it meant that I needed to start my new goals/resolutions and inevitably something would come up (January 1st is a HOLIDAY btw – tough time to start anything new) – I’d be busy with family or whatever else was going on and I’d get sidetracked and not start – or forget to start and because it threw off my “perfect moment” I’d sometimes just quit.

For example, I had this brilliant idea that I was going to focus on 12 areas of my life a few years ago. I was so excited. I called it the “Daily Dozen”. I can’t even remember now what they all were now. It was a very lofty goal to try to divide my focus on 12 areas every day and still function as a mom and homeschool teacher – not to mention everything else I was needed to do then. They were all GOOD things too – just not DAILY. There needed to be balance but I didn’t recognize that then – I just had that idea and so January first I went to start my dozen and only got to 6 or 7 of them.

I was disappointed in myself but day one…let’s try again, so day two – same story. Day three – less. Day four – even less. Day five – did I get to any? I can’t remember…but by day 7 of the first week I quit.

I was resigned and made it mean a lot of unnecessary things about me – I failed. I couldn’t stick with it. I’m not good enough….all that stuff that we tend to pile on when we don’t succeed in our goals…all untrue btw – but I wasn’t at a point to accept that yet. I will say that I ended up narrowing it down to the daily 5 – 5 things I could remember on my hand and it helped tremendously that year.

So this concept of START IN DECEMBER – it gives you a nice cushion to start, forget, re-start and establish lasting habits that will carry you through the following year.

Let me give you an example, in our family we like to play this game called, Nertz. It’s totally fun and chaotic -which is probably why our family likes it so much – like calls to like, right? Anyway, there’s this lingering joke because when I first was learning how to play I was pretty terrible at it

. There’s a lot going on and I wasn’t coordinated at first to focus on all the areas I needed to yet so when it came time to tally up the score after each round I’d say, “Oh, that was just the practice round”. Then the next round if I still failed miserably, “Yeah, another practice round”. And because my family is awesome and nice they ran with it – for a good 6 or 7 rounds. Then the first one round I won I said, “Oh! Now we’re warmed up. We can keep score now.” – So it’s been this running joke for years now that if I don’t win the first round they ask, “Let me guess, that was the practice round?”

The concept is the same for our goals and December. If you started TOMORROW, December 1st – you have THIRTY ONE days of cushion for you to get “warmed up” for your perfect 2018 year. December 1st is not a holiday weekend either. I don’t know about you but there is A LOT that goes on in December and the longer I wait to start, the more challenging it’s going to be because there’s just so much happening. My advice, start sooner! Get those “practice rounds” out of the way now so come January and it’s already a rock solid habit!

No more, day one? fail. Day two? fail. Day three? fail. Day four? Quit… You can still have those fail days. That’s what December can be for you! You have 31 days to fail and start again and each time that happens just say, “Self, it’s OKAY. That was just the practice round” then START AGAIN. You can still have your “perfect” year – although I’d highly encourage you to aim for progress over perfect. It’s much more forgiving and freeing! If you did 6 out of the 7 days then you still made progress! If you set yourself up for perfection and you miss one day then you failed and quit – how much progress is there going to be in that? Go for PROGRESS over perfection.

So what goals are you thinking about for next year? Don’t wait until the last week in December to decide. Grab a piece of paper – or open a writing app on your phone and start brainstorming TODAY. Then go for it – start tomorrow! Begin BEFORE you’re ready and by January 1st -you’ll already be a pro!

I’d love to hear from you! Comment below about your plans, goals, December practice rounds and how you started again. 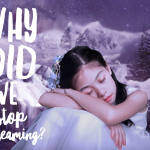 Why Did We Stop Dreaming?Blog 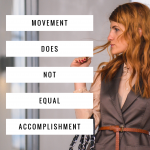