I’m Hannah Coles and you are listening to LOVE AT HOME episode 35: This is so hard!

How often do you find yourself saying that phrase? At home, with your family, with work, with callings, friendships, budgeting, dieting, I tell myself that whenever I run into tech issues. This is just too hard or generally it’s like this loud groan ugh…this is so hard! We don’t even realize what’s really happening and just how much of an impact those four little words can have on our lives and how we’re showing up. So today I wanted to spend a little time shining the spotlight on that sneaky little phrase and offer you a replacement to put in it’s place.

So first off, why do we say that to ourselves? When was the last time you said that? Think about what you were doing. What was it? At what point did you say that? Then this is really important, after you said that -whether that was audible or just inside your head – how did you feel afterwards?

We think we’re just “venting” or letting off some frustration that we’re feeling at the moment but I promise you the effects are far more reaching than that one tiny moment those words were thought or spoke or maybe even yelled. I used tot say that phrase all the time. I can remember saying that phrase back when I was 5 learning to play the piano even.

There was this one gorgeous afternoon where all my friends were playing outside and I had to practice the piano. We had this huge bay window with sheer curtains to let in soft light but really it was just this giant opening to taunt me so I could see everyone else having fun outside without me. So I remember sitting at the piano trying so hard to play a scale with both hands together. This is why I remember being so young because I started when I was just 5 so you can imagine my impatient brain and what was really taking priority then and it was not playing scales.

My mom came in and set this old time timer on the piano because I must have been complaining. So I sat there sandwiched between the timer tick, tick, ticking which even though it was ticking didn’t seem to budge. It still felt like I had to be there forever. And on the other side all my fiends outside running and playing catch and just having so much fun, right? At one point I finally looked down at my fingers and just resigned that I’d actually have to make it through. So I tried getting both fingers to coordinate and do two different things at the same time and to a 5 or 6 year old. That’s tough stuff my friends!

I’d play a few notes and when my thumb was supposed to go under I’d forget and then run out of fingers but still have several notes left. So I’d start again and focus on the right hand while forgetting the left. Over and over and over again I’d struggle through it. Then I distinctly remember groaning and in exasperation telling myself, “This is so hard!” I don’t remember if I got it at the one practice but obviously something finally clicked and scales became so easy and fast and I was able to play them all with my eyes shut.

But even at the age of 5 or younger I’m sure we started learning this phrase and we placed negative feelings with it. Things shouldn’t be hard. When it’s hard – someone fix it and do it for me, right? Take this away. I shouldn’t have to do hard things. This should be easy.

It’s certainly NOT us. It’s all them, right? They’re the one’s making it hard. But it’s because we have this idea of how things should go and when it doesn’t happen we get this resistance and pull. We have to use extra effort to pull back so we end up in this all out tug of war with whatever it is you’re struggling with at that time.

So why are things just so hard?

A huge part of it is our expectations. If you didn’t assume it should be “easy” then you wouldn’t be resistant to it in the first place, sure. We feel entitled even that things shouldn’t be hard. I shouldn’t have to discipline my kids ever – they should just know and be and listen and do, right? So when my 8 year old acts 8 and I get frustrated it’s because I have that expectation that he shouldn’t do that.

But here’s the thing, what if it’s supposed to be hard?

Why not just let it be hard?

There’s two things I want you to think about with this. One, do I need to realign my expectations and beliefs?

What do I want to think about this?

My 8 year old has a hard time folding his clothes and keeping his room clean.

My immediate, auto pilot self wants to get frustrated and think, AH! Haven’t we gone over this a thousand and one times? Why? Why do I have to do this again and again. This is so hard.

But when I stop and ask myself what I want to think about it?

I realize that he’s 8. 8 year olds don’t always like folding clothes or cleaning up. It’s not a problem to them at all. I think they like things out on display. So what I want to think about it is that he’s 8. He’s learning and who better to teach him than me?

See the difference? In one I’m just reacting. I’m losing it and getting frustrated and notice, if I put this in a model it would look like this:

My thought is: This is so hard

Then your result that you’ve created not your 8 year old is – this is hard.

When instead I choose to think: 8 year olds are still learning.They’re not supposed to get it yet. Who better than me to teach him?

Then I feel more compassionate. Notice – I’m still acknowledging that this isn’t fun. It can still be hard but instead of just a dead end I see a bend in the road. There’s light, hope, and progression.

When I feel compassionate I’m going to be more likely to remind, to teach, to exemplify, to help him figure out how to make it work and when I do this I create for myself,

That everything is as it should be.

I love these two models simply because it doesn’t take the trial out of it. We’re supposed to be growing. But it does take me out of auto-pilot and into my conscious mind where I decide what I want to think, what I want to feel, what I want to do about it, and ultimately what world I want to live in.

I have all the control. I’m not blaming the circumstances. I’m not a victim. I get to choose and decide.

Whenever you think, this is so hard. Stop, pause, reflect and just ask yourself – what do I want to think about this?

It doesn’t have to mean that you think it’s wonderful, your favorite (although that’s a question I love to ask myself too – how could this be your favorite? How could you work with this circumstance instead of against it as if you had chosen this moment? All good questions) – All these questions take you out of auto-pilot and into your agency and choosing your path.

And, what if it’s just supposed to be hard?

We buy gym memberships knowing we’re going to stretch ourselves. But we want that. We pay for it monthly! We know it’s going to be hard and yet we do it anyway.

But with other things we’re like, no…clean your room already. We just finished our taxes and I had to compile a ton of paperwork and I wanted to tell myself how hard this all was. I was like, Taxes, file your own paperwork, hop to it! Grow some legs and walk yourself into my file folder. Because I shouldn’t have to do hard things right?

Trying to get everyone to agree on something – hard, right? It shouldn’t be hard. They should just listen to you and do what you say, right? So we tell ourselves that and we get frustrated because they’re not listening. They didn’t get that memo and now you’ve created this result for you that this is hard and it shouldn’t be.

But what if it were just okay? Of course we’re going to disagree. We’re all coming from different perspectives and thoughts and ideas. It’ll take a little time to hear everyone and decide. Totally okay. It’s not supposed to be easy. We’re all different and bringing our own unique mess to the plate.

Just notice, what comes up for you when you tell yourself something is hard. What you think and what you believe will always come into fruition. It’s a self-fulling prophecy. When I think it’s hard, it’s going to be hard.

Have you ever gotten your blood drawn? They tell you to relax and you’re like, uh no. I’m going to clench up and resist this. It’s going to hurt! And what happens? They’re trying to stick a needle into a rock – of course it’s going to hurt! But when you relax into it, it doesn’t feel magical it pinches for a moment but it’s really not that bad.

Stop resisting. Just let it be hard and let it be okay.

Okay, my friends, you get a short one today so you can mull this over and think about what you want to think about your specific challenges. 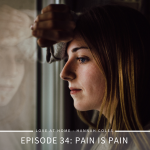 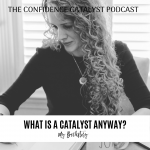 My Backstory: What is a Catalyst?podcast