It seems pretty much inevitable, at some point in our lives we are going to come face to face with someone that is just MEAN. It doesn’t feel good and catches us so off guard that it usually leaves us feeling terrible and flat out confused. What do you do when someone is just mean?

I don’t know all the words to the Taylor Swift song, just the chorus actually…okay, really just the tag line in the chorus, “Why you gotta be so mean???” – do you know the song? That’s kind of how we feel. Like, What the heck?! Why? What did I ever do to you??? and then we spend a lot of time thinking, backtracking, and replaying every single interaction that we can think of to find a reason WHY!

Let me tell you a little about “mean people”. Mean people and Angry people are just SCARED people. Anger is a secondary emotion meaning there is a cause for the anger in the first place and anger ALWAYS stems from SCARCITY and FEAR. Mean people are afraid of something – no, I’m not talking about spiders. I mean they’re afraid of losing status, control, their image, power, being right, etc.

Mean people are INSECURE. They must PROVE to the world and themselves that they are right because being wrong would be a terrible blow to them. So instead they go about doing and saying things to prove their image, status, standpoint, etc not really caring how they’re going about it.

If you find yourself in their warpath or even the target, there are things you can do and think that will help you through this.

The first is to KNOW that IT IS NOT ABOUT YOU. What they do, say, and how they think about you is ALL ABOUT THEM. Repeat this over in your head – say it aloud even, IT IS NOT ABOUT ME. Even though it FEELS like it is about you…I promise you, it’s NOT.

The second, who do you want to be? What kind of person are you? – This doesn’t change based on each circumstance – what character do you have? Are you a kind person? loving? genuine? You can STILL be that person even if there’s a thorn at your side. You have the agency to choose how you’ll show up always. You can decide how you want to think about them. What would kind ___________(say your name) think? What would kind (your name) do?

*I do want to make something clear here…knowing that it’s not about you and what they say or do is about them because they’re afraid also doesn’t mean that you should just be okay with their behavior. You have your agency too. You are NOT a victim that has to just stand by and take whatever they decide to dish out. You can decide how you want to react, how you want to feel, and what you want to do about it always.

Defense is the First Act of War

Byron Katie says that, “Defense is the first act of war.” – it is NOT a war until two parties join in. They can throw insults, tacky comments, a mean look – but it means NOTHING until you act upon it.

We are not immune from others behaviors. We can’t control what they do or say. We can only control what WE do, what WE think, and what WE say. If I don’t like something I don’t need them to change anything. I need to change something because it’s the only thing I CAN control. You can argue and say that’s not fair – but you’ll be arguing with reality – with what is – and you’ll lose.

See if you can find where the scarcity lies first. Why might they be acting that way? What are they afraid of losing? or not having enough of? Status? Position? Respect? Of being right? It’s easier for us to feel better when we can remove ourselves from the situation. When we can step outside of it and know that it is not about us then we can stop making it mean ugly things about us – it doesn’t have anything to do with you – if they don’t like you – it’s not you, it’s because of THEM. Take yourself OUT of the equation. Then find why they might be feeling that way or acting that way.

Doing this will give YOU better thoughts about them and help you show up in a different way around them. The whole point isn’t to “fix” anything – sometimes it can’t be fixed because they don’t want it to be – the point is for YOU to feel how you want to feel and be who you want to be despite whatever circumstances arise. You CAN feel how you want to. You can show up as the person you want to be.

If you can get to a place of curiosity about them – being curious as to where their scarcity lies then you can easily get to COMPASSION. Compassion for them that living that way, thinking that way must be exhausting. It must feel terrible to be living in fear and anger all the time. Whatever it is you think, compassion goes hand in hand with curiosity.

So be curious, then compassionate because compassion leads to LOVE.

I know that this will feel like a stretch to some especially if you’re in the midst of an uncomfortable situation right now but this will help you feel SO MUCH BETTER.

If you can be curious about them, their behaviors, their actions and then get a place of compassion and sympathy for them. You CAN get to love. LOVE feels amazing in any form.

Remember only you get to feel what’s inside you. Feeling offended and hurt doesn’t feel good. Why not try to get to compassion and love that feel so much better. That will help propel you to becoming the person you want to be? Why would you deny yourself the opportunity to feel love?

Love feels best – get to a place of LOVE

Dallin H. Oaks said, “Love is the most powerful force in the world” – This is where you want to be.

In a situation where you might have once felt powerless – don’t you want to do everything you can to get your power back? LOVE is going to the that answer. It is possible. It is there for you. It will require a little mental work (okay, maybe a lot of mental work) but it is possible and it will feel SO MUCH BETTER than being a victim and reactive and at the whim of their behavior.

You can do this. There is supposed to be opposition. There’s supposed to be learning and this is a huge opportunity to learn. Remember the four steps and you will be okay. You will feel better, I promise!

1.) Remember, it’s NOT about YOU
2.) Control what you can – you – Who do you want to be? What kind of person is that? How does that kind of person show up? What would they think? How do I want to think and feel?
3.) Angry people are really just SCARED people. Try and find their scarcity.
4.) Climb the ladder to feeling better: exercise curiosity instead of judgement – I wonder WHY they’re acting that way? Curiosity leads to COMPASSION and compassion leads to LOVE – which feels THE BEST.

Try these steps. They work. I know they work. It does take a little extra effort. It’s EASIER to be offended and hurt BUT it feels terrible. Do the extra mental work and get your power back. Give yourself the time it takes to get to LOVE because that feels so much better than hurt.

Okay, let me know how it goes for you!

So you missed the promo – it’s okay! You can still get FREE coaching on whatever you want coaching on! No strings attached. Set up a mini today! That’s it. Book that HERE 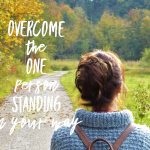 Three things to help you overcome the ONE person standing in your way.Blog 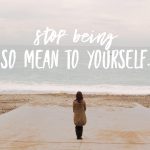