Don’t Accept the Norms of Your Time

As the holiday breaks/vacations come to an end and “real life” begins again or back to the norms.  We all get to this point where there’s a fork in the road and we have a choice to make. We’ve made our new goals and resolutions to become a new you, to start something new, to make changes and then the fork: What are we going to do with our time?

Do we choose to do what we’ve always done? Spending our time on the same routines, activities, actions that we’ve been practicing over and over again? And while that’s worked to get you through and afloat, is it allowing you time to do what you really WANT to do? Are you allowing yourself the time to go after what you told yourself you would? Do you dare to take a different path to go after your New Year’s goals?

This fork is really important. It’s going to determine what your December of 2018 is going to look like. You all know the famous poem, “The Road Not Taken” by Robert Frost:
“Two roads diverged in a yellow wood,
and sorry I could not travel both
And be one traveler, long I stood
And looked down one as far as I could
To where it bent in the undergrowth;

Then took the other, as just as fair,
And having perhaps the better claim,
Because it was grassy and wanted wear;
Though as for that the passing there
Had worn them really about the same,

And both that morning equally lay
In leaves no step had trodden black.
Oh, I kept the first for another day!
Yet knowing how way leads on to way,
I doubted if I should ever come back.

I shall be telling this with a sigh
Somewhere ages and ages hence:
Two roads diverged in a wood, and I—
I took the one less traveled by,
And that has made all the difference.”

I know you can all relate to this. We’ve all been here…numerous times and we will again come to this point several times throughout our lives. We need to choose which path we’re going to take. There have been years that I’ve taken the well worn, well known, already familiar road because at the time it felt easier and I felt like I needed easier then. I didn’t want to take the unknown path. I didn’t want to adjust my schedule or I didn’t think I could but when I did that, when I chose to stay in my same routines – I knew that I wouldn’t be any closer to accomplishing my goals and dreams that I had entertained January 1st.

This includes making changes, taking things OUT of your life – or setting them aside for a season, maybe this means shifting things around so you CAN do something new.

I have a friend that I spoke to years ago about this. She didn’t like making New Year’s goals or resolutions because she didn’t have time to complete them so why bother? – this was her thinking. She was in a job she liked but it was super demanding of her time. She was the sole bread winner and needed that job to provide for her family. Her work was far away so she had to get up early and leave and then sometimes she’d also get home late. She was exhausted and frazzled and feeling stuck. She told me she COULDN’T change. She HAD to work. She HAD to provide for her family. She’d love to read and do something fun once in a while but she felt like she DIDN’T have a choice.

There are ALWAYS Options

She was tired both physically and mentally. How disempowering to feel so strapped and stuck. There isn’t anything you HAVE to do…EVER. There are things we CHOOSE to do because we like the result it brings but we never HAVE to do something. We have to take our responsibility in that. We choose what we do with our time. For my friend, it’s okay that this is the path she’s choosing. Maybe she just wasn’t ready to take the lesser known path yet. But there is always, always, always a choice. Making changes in your life – big ones like my friend had isn’t going to be easy by any means but you always have options.

For example, This last week my family and I watched, “McFarland USA” – such a good movie. It starts out with Jim White (played by Kevin Costner) getting fired from his current job as a football coach. Needing a new path he uproots his family to a new area where he gets hired on as the PE coach for a school in McFarland, CA. The kids at this school have little to no hope for their future. It’s quite a contrast from the school he was at to the one he’s at now and he’s unhappy and hating his job until he notices a talent some of the kids have as exceptional runners. He starts a cross country team and trains them to become successful and win the state championship (and 8 more after that). What’s amazing about this movie is that the youth on his first team were all able to rise above their current circumstances and poverty to pursue their dreams of progressing on to college and some to military careers.

So, there’s this part in the film where these boys are at the big race and their coach is giving them a pep talk to help them overcome their fears. He tells them that he’s

never seen a more determined youth. “They haven’t got what you’ve got. They don’t get up at dawn and go to work in the fields. They don’t go to school all day and then go back to those same fields, that’s what you do. Then you come out with me and you run eight miles, ten miles and you take on even more pain. These kids can’t do what you do. They can’t even imagine it…You guys are super human…there’s nothing you can’t do with that kind of strength.”

Sometimes to rise above our current circumstances we need that kind of strength. We need to become super human. We need to do what others can’t even imagine doing. This is what separates those who achieve and become and the others that won’t.

These teens chose to take the less traveled road, the hard road, the road that asked them to sacrifice time and precious energy and go forward hoping that this road will take them to a better destination…and it did.

It’s not going to be easy. It will demand a new you. It will require sacrifice but…it will also make all the difference in your life.  I don’t know what that sacrifice means to you or the goals you’ve set but a new path with new goals will always require sacrifice of the old you, of your old habits, of time, etc.

Neil Strauss, successful author, editor, and highly successful businessman once said,
“The biggest mistake you can make is to accept the norms of your time. Not accepting norms is where you innovate, whether it’s with technology, with books, with anything. So, not accepting the norm is the secret to really big success and changing the world.”

What are the norms of your time? Revisit your schedule, your time. Revisit what you do with your day and how much time you spend on certain things/activities/projects. Are you willing to accept these norms for your time? Can you shave some time off some of these and use it to further your goals?

John Bytheway said once that he used to stay up to watch late night TV. One day he decided that he would no longer accept the norms of his time and he went to bed earlier so he could get up early. Within months he had written his first book…which lead him to an entirely new destination that shaped his life for the better.

Make an inventory of your time. Think about how long it took you to do your norms. Do you need to keep all of them? Do you want to? You already know where taking the “normal” road goes. Are you ready to try the less traveled path this year? Are you willing to NOT ACCEPT the daily norms of your time?

It Won’t Be Easy But It Will Be Worth It

It will not be easy. Your brain will want to fight you because it LIKES EASY. It likes what it already knows. It likes what you’ve always done and you’re going to get push back trying to start something new. Go into KNOWING this. It’s okay. Want the end goal more than the comfort of what’s known/what’s normal for you.

When you come to your fork in the road are you ready to take on the less traveled road? It will, without a doubt make all the difference in your life.

DON’T FORGET ABOUT MY GIVEAWAY!!! ENTRY IS EASY!  At the top of the page – just UNDER the featured image on my home page there’s a box to subscribe to the weekly email, Think about it Thursday (Short email with something significant to think about and get your wheels turning – it’s good you guys – you’re going to want it). Subscribe to this list and that’s it! You’re in! The winner will be chosen January 11th.

Overcoming our habits and our “norms” isn’t easy. Let me help you. Schedule a FREE mini session with me and get help working through those road blocks. Book that here 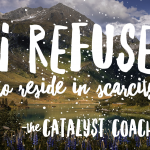 I Refuse to reside in Scarcity Blog 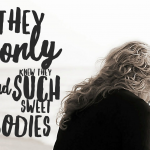