Recently as I was studying CFM and the discord happening in church history shortly after the dedication of the Kirkland temple and it struck me how much blame was being passed around. Some of the people blamed Joseph for not foreseeing the economic downfall in the nation among many other things and I was feeling so sad looking at the events from a 2021 view point and wishing that they could see what we see.

And that got me thinking about blame and just how much turmoil and emotional toxicity we create when we blame. It’s something we’re all familiar with. If you went looking for it you’d witness or hear it in your life on a daily basis. Someone isn’t happy about something and so we blame. We must find the culprit responsible for this mishap (even if it’s ourselves).

It’s become an addiction, an obsession even – our knee-jerk reaction to fault find or blame. It starts off seemingly harmless but if we buy into too much or deeply it can create a huge divide and discord in your life.

Ponder for a moment what blaming does in a relationship. If you are the one being blamed often – daily even, what does that do to that relationship? I know personally, it’s not one that I’m eager to foster and keep being around them, right? So what happens then if you find yourself as the blamer and the blamee?

You can’t distance yourself from your own mind. You can’t just block yourself or your thoughts like you can someone on social media or in your phone contacts. You can’t move to a new area or give yourself the silent treatment – all actions I’ve seen people do in attempts to escape the negativity that blaming instills.

My goal is to help you create solid confidence, quiet confidence where you can feel safe, secure, and feel an inclusivity within yourself and playing the blame game is one of the quickest ways to sever any hopes of that. And it’s hard to avoid because we live in a day and age where we’re privy to so many insights into people’s lives where they too are blaming themselves and/or others often so it becomes somewhat normal.

But perceived normal or not, it’s doesn’t feel good – and so many of us have grown accustomed to believing these perceived faults or weaknesses in ourselves that we don’t even realize we’re doing it. It might seem like you’re just noticing things about yourself.

I shouldn’t have done that.

I can’t believe I did that or said that.

I shouldn’t have overslept, overate, over shared!

It’s so sneaky if you’re not careful and the real danger is that the blaming habit becomes a part of your identity. Notice, “I always do things like that!” Or we start building a case with evidence to use against ourselves that keeps us limited, stuck, or showing up inauthentic. So many of you believe things like you’re too much for some people, you post too much, you share too much, you talk to much, you say too much – which is a sneaky way to blame yourself for not being what you believe to be acceptable or likable.

And just think about what all of these beliefs are doing to you and what kind of feelings you’re creating with these tales. It triggers anxiety, stress, fear, worry, inadequacy, and inauthenticity. And like I mentioned, if you’ve been practicing these kinds of thoughts for a while it becomes automatic.

It’s like when you hear a particular few words said in a certain tone that makes you immediately think of a show or a movie. Or hearing a few notes that makes you automatically remember a song. My son just did this today. He was sitting at the piano and he randomly hit a few notes and he paused and was like, “wait, what song is that!?” And then he just started plucking out this full song because his brain had heard and sung that tune several times before.

When we practice fault finding and self-blame often it doesn’t take a lot of energy to take you from feeling neutral to inadequacy in 0-.3 seconds. It’s something I see all too often – even in myself, I catch my brain wanting to go there and I have to be really careful and intentional in how I proceed forward because when I don’t catch it, it can derail you really fast.

I’m reading this book to my kids right now called, Echo Mountain by Lauren Wolk, which is amazing and I highly recommend it so far – we’re not finished with it yet so I might change my mind if it has a bad ending but it’s a middle grade book and honestly up to this point it’s been so good and written so beautifully well so I don’t foresee that happening – but there’s this quote from the book that made me pause and think about this blaming habit.

She wrote: “Blame comes from the Greek for ‘curse’. That’s the root of it. A curse against the sacred.”

And the sacred in this context meaning relationships, people, and you, your relationship with you. You can’t create confidence if you’re constantly cursing yourself – beating yourself up in subtle ways for not being, acting, or showing up how you think your should. It’s arguing with yourself instead of giving yourself room to grow and to be human.

Now the danger in all of this (besides sabotaging your relationship with yourself) is that blaming starts to feel temporarily good. It offers a weird momentary relief from addressing the current situation or facing the immediate emotion.

I love the way Mateo Tabatabai puts it in his book, The Mind Made Prison – also a recommended read. He says,

“Blame has one function and one function only: to deny responsibility of your present moment because it is too painful to realize you are in fact responsible for the hurt you are feeling.”

So even when we self-blame we’re in that moment trying to steer ourselves away from a negative emotion to create and feel a different negative emotion but this time it’s one that’s been well-practiced and well-felt. Your brain already knows you can survive through blame and inadequacy because you’ve felt it many times before but the current initial feeling? Well, I don’t really know. Better run with what’s “known” because that’s safer. So even though it doesn’t feel good, it feels known, it feels like the safer choice.

When we’re triggered by a post or a text your brain might jump to self-blame – I post too much, I overshared again and immediately we feel insecure and ashamed even and while those feel terrible it temporarily took the weight and fear off of the unknown which is what your brain doesn’t want to venture into – what posting too much really means, what oversharing really looks like or what other’s might be thinking of you. So we do a shortcut and blame ourselves and label ourselves so we don’t have to risk the thought/feeling track of potential rejection.

And as long as you’re focused on fault finding you’ll continue to show up inauthentic and playing small – not only denying yourself what you wanted to do in the first place – share your joy, your life – It’s this sneaky blaming practice that keeps us from doing, saying, or being who we really want to be.

So how can you move forward and interrupt the blame cycle?

Then ask yourself, what is really the problem? It’s not going to be you. You are not the problem – it’s always going to be what’s “in the way”. If you overslept and your immediate thought is to blame yourself, “you always do this!” “You can’t ever keep a consistent routine”, “now everything is ruined!” Kind of talk – you’re not addressing what’s in the way.

What’s in the way is that you have a scheduling challenge now. You thought it was going to look one way but now it looks differently and instead of making it math – like, that happened, now what? We dive into blaming because it feels more known.

But now you feel awful, you feel less secure, and these are the feelings you’re bringing into figure out the new equation so to speak.

So instead, when our goal and aim is awareness, watching our brain want to go there but instead of reacting we just look for what we think is “in the way”.  Instead of feeling disappointment and a new challenge, you’ve added on shame, insecurity, and fear – not the best feelings to problem solve with.

But the way to progress is to step back and sort through the urge to blame to get to “What’s in the way”. Now from this place you bypass the need to insecurity and doubt and you’re able to move forward and activate creativity and determination.

You CAN learn to bypass blame, doubt, and worry when you actively notice and look for the way amidst the mental clutter – when you oversleep instead of blaming yourself that you always do that – you just focused on Now what? Think about how much better that avenue would feel – think about how much more productive and how much progress you could make – not to mention how much better of a relationship you’d create with yourself, right?

The truth is that the things we blame ourselves for – our perceived faults aren’t really faults. They’re just thoughts or expectations. You expected yourself to wake up at a certain time, you expected yourself to have a certain schedule. It wasn’t that you’re “at fault” – it’s more like, “I thought my morning was going to look like THAT – I guess now, now what?”

So many of our faults (if not all of them) are just practiced thoughts that we’ve adapted or accumulated over time and these thoughts are optional and can be changed. When you make the decision to look for them, to focus on “the way” and not indulging in the known – you’re able to progress and move forward. You’re able to start establishing trust with yourself. You’re on the path to creating quiet confidence with yourself.

Just acknowledging what is really going on – being 100% honest with yourself helps you take huge strides forward into a more confident, secure life. Start practicing the phrase, “I thought it was going to look like that, I guess not, now what?”

When you overslept (which just to clarify isn’t really a thing – it’s a thought, – you had an expectation of how much you’d sleep or when you’d wake up – and when what happened didn’t match what you thought you wanted we argue and start to blame). So when you overslept instead of diving into the self-loathing track you just immediately went to math and facts – you’re able to gain traction and leverage over your day and over your mind. No negative labels required.

It can be as simple as, “I thought I was going to have 3 hours in the morning. I guess not. Now what?”

And it’s so beautiful because it makes it a challenge – a way to engage in curiosity and creativity – two things your brain really likes to think about. Two things that help you grow and progress. Two things that offer trust which is an integral aspect of the confidence model.

We have to stop cursing and blaming ourselves and others and learn to take responsibility for our emotional and mental energy.

Okay, my friends! Have a great week! I’ll talk to you next time! 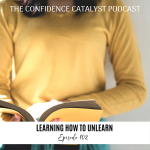 Episode 102: Learning How to UnlearnBlog 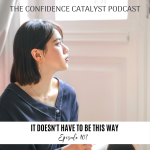 Episode 107: It Doesn’t Have to be This WayBlog