There are many of us who operate from a single-story perspective and you can’t help it at first. It’s all you’ve ever known. But there’s a problem with this single-story perspective. Chimamanda Ngozi Adichie once said, “The single story creates stereotypes, and the problem with stereotypes is not that they are untrue, but that they are incomplete. They make one story become the only story.” Stories matter. Changing your perspective changes everything.

Hey there Catalysts! Welcome to my bonus episode today. I’ve been doing a lot of coaching this week on what’s happening in the world, in their communities, on the riots and there’s quite a bit of worry, pain, anger, but mostly on fear so I wanted to offer some thoughts and help you get back to a confident space despite the unrest around you.

Fear is a very understandable emotion and it’s pretty common all across the board and I say that not to diminish what you’re feeling or experiencing but rather to calm your worries and thoughts that you “shouldn’t” be feeling that right now because you should – how do I know you should? Because it’s what you are feeling.

I always teach the first step to growth, to change, to becoming is through acceptance. Acceptance isn’t endorsement. It’s not you agreeing with the things going on but rather that you acknowledge that humans have agency and get to choose what they want to do with that agency. It’s looking at the world and thinking, “okay, that happened, now what?”

And that’s what I want to talk about today – the now what?

You’re feeling how you’re feeling because of what you’re thinking about those things. We’re all walking around as moving manuals. Remember, a manual is basically a “rule book” of how we believe other people should treat us and how others should show up in the world.

Person A thinks people SHOULD do this

Person B thinks people SHOULD do that

And so you can see just about everywhere people are contending one with another, arguing, petitioning, defending, protesting because of their manuals. And I’m not saying you shouldn’t – There are chapters in my own personal manual that I really like, that I wholeheartedly believe in, that I don’t want to drop but I also recognize that my manual might be different than your manual.

More than ever we need to show up confident and if you remember confidence is really synonymous with certainty. When things feel so uncertain around us we need to make sure we feel and create solid ground beneath us so that we’re not swayed by the voices around us but rather that we choose intentionally and deliberately what we believe, what we stand for, and what we’re willing to work for.

Confidence is knowing and I’m currently in the process of publishing the confidence challenge series – today day four comes out so make sure to catch that too because it’s so important to be able to come from that strong space, from the certainty, and security.

Confidence is knowing and embracing all the parts of you and being able to trust in yourself and in your abilities. This doesn’t mean that I have all the answers. This doesn’t mean that I’m closed-minded or limited. This means that I understand that I don’t know all things – there’s the knowing – and it’s okay that I don’t know it all yet – embracing – and because I honor and value myself I’m willing to do the work necessary to understand, to listen, to learn, to dive in deep and broaden my perspective so that I can know so that I can understand so that I can create certainty. – There’s the trust.

Chimamanda Ngozi Adichie gave an incredible Tedx Talk that I highly recommend right now. It’s called, The Dangers of a Single Story. Add this to your schedule today – go watch it and be inspired because she talks about our lack of understanding and it’s not that we’re uneducated or unknowledgeable it’s just that we only have one side, one story, one perspective and we live in a global society where there isn’t just one story but billions.

And I think that’s where a lot us are right now, myself included. I wholeheartedly echo and believe the words of Mary Lou Kownacki’s when she said,

“There isn’t anyone you couldn’t love once you’ve heard their story.”

In the Book of Mormon, there’s a part when several peoples were being gathered together and converging from different lands, different backgrounds, different cultures, rules, and traditions and they’re now coming together under one king and one government and King Mosiah had to figure out how to unify them and bring them together. I had read this passage more times than I can count until one day it just stood out to me so strongly that I couldn’t believe I had overlooked this gem all those other times.

In Mosiah 25 we read that King decided to gather all the people together and they read the histories of each people and as they read and started understanding the hardships, their trials, their loss it says that “they were filled with sorrow, and even shed many tears of sorrow…and filled with pain and anguish”

As they read about their triumphs and how they overcame oppression we read that “they were filled with exceedingly great joy, that they were struck with wonder and amazement”

Learning from others changes the way you see things. It’s entirely different reading a passage on a page or in a history class written through one perspective and hearing it from someone who has lived it or seeing it for yourself. It broadens your perspective.

One of the greatest gifts we can give to ourselves and our fellow human beings is the willingness to be curious, to be open to broadening our perspective and humble enough to admit that we don’t have all the answers. That maybe we don’t know all the things. That maybe there’s another perspective to try on and explore.

There’s quite a bit of definitive’s going on right now. I’ve coached and read about people that gotten backlash for how they’ve responded to the media and to friends and so there’s a fear that if you don’t know you better know quick and make a definitive stand.

People are worried that silence is complicit and they don’t want to be complicit but they’re confused and missing information.

Brian Grazer said, “Curiosity—asking questions—isn’t just a way of understanding the world. It’s a way of changing it.”

All trailblazers started with curiosity. They started with what they had, their story, and a belief that maybe there could be a better chapter ahead. What if…

Grazer continued by adding, “Life isn’t about finding the answers, it’s about asking the questions.”

You have to start with questions.

If you don’t know what to ask, listen.

But listen with an intent to learn.

“What I need is perspective. The illusion of depth, created by a frame, the arrangement of shapes on a flat surface. Perspective is necessary. Otherwise there are only two dimensions. Otherwise, you live with your face squashed up against a wall, everything a huge foreground, of details, close-ups, hairs, the weave of the bedsheet, the molecules of the face. Your own skin like a map, a diagram of futility, crisscrossed with tiny roads that lead nowhere. Otherwise, you live in the moment. Which is not where I want to be.”

Perspective provides not the illusion of depth and understanding but genuine depth, real understanding, deep empathy.

Until you have perspective you’re going to be like what Atwood described, looking at a two-dimensional image, or seeing as far you can with your nose pressed against a wall. You can’t see that far, right?

I read the book and saw the film, Just Mercy which was powerful and horrific and I had no idea of the things happening in our country and in the judicial system. I only had one perspective. But reading the accounts of the inmates, of some of the guards, of the people I was changed. The movie was really good but I’ll always advocate for the book because they can only squish so much of a 300+ book in a two-hour movie so read the book and widen your perspective.

I had so much compassion and empathy for them while reading, and afterward while talking to others and hearing more stories, more examples, gaining more perspective.

Love is the most powerful force on earth – Dallin H. Oaks said that and I wholeheartedly believe and stand by that.

I operate as my highest and best self when I’m coming from a place of love.

Please note: I’m using they generally here – they is not everyone – it’s not even the majority. What I’m offering is an invitation to broaden your perspective.

Look at the world and think about what you want from it.

If you want a world of understanding, love, peace, tranquility, equality, freedom, respect, honor, and compassion then that’s what you need to give.

Mahatma Gandhi said, “be the change you wish to see in the world”

When you look at the things going on and think, “they shouldn’t be doing that. They should be more…”

Instead of mirroring the very thing you say you detest, change it. Instead of adding more of that into the world, bring the peace, the love, the generosity.

Let people be wrong about you. It’s okay if they don’t understand you, they’re misinformed or have incomplete information and I think the same thing when I’m wrong about others too. I don’t have all the information.

Grazer said, “All it takes is the curiosity and courage to initiate engagement with another human being, and the willingness to listen and learn with an open mind.”

But it starts with a desire to know, to ask, to be curious and humility to admit that we don’t have all the answers. We don’t know all the things. When you invite curiosity you’re setting the stage for a wider perspective. When your perspective changes, everything changes.

Let me offer you one last invitation from Chimamanda Ngozi Adichie. She says,

“If you don’t understand, ask questions. If you’re uncomfortable about asking questions, say you are uncomfortable about asking questions and then ask anyway. It’s easy to tell when a question is coming from a good place. Then listen some more. Sometimes people just want to feel heard. Here’s to possibilities of friendship and connection and understanding.”

Your thoughts matter. Your thoughts create a chain reaction that creates your world, your experiences, and what you continue to add to the world.

When I engage in questioning I’m always grateful I did because it offers me more clarity, more understanding, more sure footing for me to stand on. Remember the song, “What the world needs now is love, sweet love” if you can’ t get to love just yet, get to curiosity. Curiosity leads to Compassion.

Broaden your perspective and embrace understanding.

You are the catalyst for the change you want to see in your life. 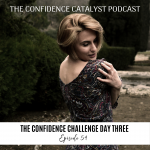 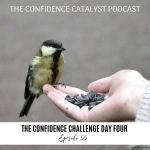